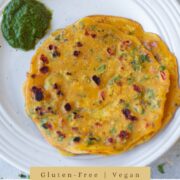 Besan Chilla is a family favorite, known for its characteristic earthy flavor from besan/ gram flour and simple Indian spices and herbs, including chilies and onions. These savory gram-flour pancakes are nutritious and vegan! Perfect to enjoy with your favorite pickle or chutney!

I have lots of memories of eating this as a child. My mom made it often for breakfast and sometimes even packed it for my school lunch.

Besan chilla is a great alternative for a quick breakfast if you don't eat eggs. It is the vegan eggless omelette.

Besan is a versatile ingredient to use - It can be used for savory and sweet recipes, from the main courses to desserts to snacks - you name it, and can find so many uses.

What is Besan Chilla?

Besan cheela also known as besan chilla, besan ka chilla, puda, pudla is an Indian savory pancake prepared from besan or gram flour. It is also known as an ''eggless omelette'' - as it resembles the Masala omelette.

Besan Pudla is a traditional recipe that can be made quickly and easily with a few basic ingredients in your pantry.

Besan cheelas can be prepared in any kind of nonstick pan or a griddle/ Tawa, but I prefer to cook them on a cast iron pan.

Why You'll Love This Recipe

Like other legumes, besan is a great source of plant-based proteins and fiber that help to slow down digestion, make you feel fuller, control your weight, and keep heart disease at bay.

Learn how to make this nutritious gram flour at home.

How to Make Chilla?

You have to try this once to know how simple it is to make.

Besan ka chilla is usually served for breakfast or snacks. But I also make it often for lunch or dinner.

Have it with your evening tea/ coffee, or sweet lassi.

Place the chilla between 2 bread slices and have this chilla sandwich with tomato ketchup.

Can I Make Besan Chilla Ahead Of Time?

I do not recommend making the pancakes ahead of time because they will not be crisp. And it doesn't take very long to prepare these so you can enjoy them fresh and hot.

The besan batter can easily last in the refrigerator for 3-4 days.

Gram flour has an excellent nutritional profile. To make this healthier and lighter on the stomach, you can experiment with different vegetables and adapt the chilla to your likes. 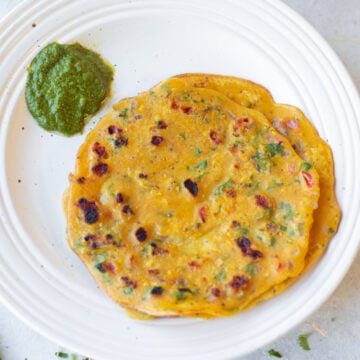