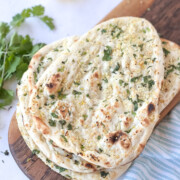 Naan is a versatile flatbread that may be served as a side dish with Indian curries, giving even the most ordinary foods an authentic flavor.

Let's learn the best ways to reheat naan. It's not difficult, and there are a few tricks to keep the crisp and pillowy naan texture, as well as the delicious flavor intact.

Having some frozen naan on hand, or some stored in an airtight container in the pantry is really convenient. You can buy Naan at Walmart, Costco, Indian grocery stores etc. Some of the popular brands of frozen Indian naan are - Haldiram, Deep, Vadilal, Swad & of course, Trader Joes.

To enjoy leftover or frozen naan as fresh as possible, you must know how to reheat them properly.

What is Naan Bread?

This wheat flour flatbread is usually generally round or oval in shape. The dough is frequently leavened with yeast, then rolled, shaped, and cooked in a Tandoor, an Indian clay oven. To increase the softness and volume of the naan dough, yogurt or milk is added.

The tandoor's bottom is filled with wood or charcoal, which heats the cylinder from all sides. This configuration allows the food to be cooked simultaneously on both sides, resulting in a unique charred and earthy flavor.

To prepare naan, the uncooked dough is flattened and coated with water on one side before being placed on the side of a tandoor oven. When the naan is done, it falls off the wall and is picked up with tongs and served hot. It is usually smeared with ghee, clarified butter before serving.

Is it safe to reheat Naan?

It is completely safe to reheat naan. After making a fresh batch of naan, or even if there are leftovers from your favorite Indian restaurant, you can store and eat it within three days.

There's no reason for good food to go to waste now that you have all the wonderful methods to reheat naan bread in a variety of ways!

The trick to warming naan bread is to keep in mind that you're only trying to reheat the bread, and not cooking it.

You can use the method of your choice depending upon the equipment and time you have on hand. It's entirely up to you whether you use the microwave, oven, or stovetop. They all have pros and cons, which I shall share below.

Let's take a look at how to reheat your naan bread so you can enjoy its fresh, warm flavor all over again.

The technique of reheating naan bread in the microwave is quick and easy. Make sure you have a microwave-safe plate on hand to begin.

If you're reheating multiple naan breads at once, spritz each one with water and place a piece of parchment paper or towel paper on top of each one. This will keep them from sticking to each other.

Also, this method will not burn your naan or make it soggy.

Frozen Naan can be reheated in the same way as well.

One of the most common method is to reheat naan bread in the oven. It is also listed on packs of Frozen naan packs.

That said, it is easy to reheat naan bread in the oven, as it restores the fluffy texture.

The stove method is the most widely used method as it applies to everyone because it is most likely the tool that mostly everyone possesses.

It comes in handy if you do not have a microwave or an oven.

Similar to reheating naan bread in the oven, there is some loss of moisture from the naan when reheating on the stove.

If you have a cast-iron griddle or skillet, the stovetop is a terrific way to reheat naan bread. It's fine if you don't have cast iron; the method will still work with any other pan.

Keep an eye on the naan bread because it will cook quickly and you don't want it to burn.

Reheating naan bread in an air fryer can be very effective. The leftover naan tastes as good as fresh when reheated. This method is effortless and works great because it reheats it evenly all the way through.

Convection fans in air fryers circulate hot air around the food. This also allows the outside of the bread to crisp up slightly while keeping the inside moist and fluffy.

The toaster can be used to reheat your naan bread but it's not the best method to do so. The naan gets really dry and there's no way that you can add water to the naan before toasting.

That said, it's really quick and a decent option when a toaster is all you have to reheat the bread.

How to Reheat Frozen Naan bread?

When trying to defrost naan bread quickly, a microwave will be your best bet. If you do not have a microwave, leave at room temperature for three hours to allow the bread to defrost.

To heat your frozen naan in the microwave, it is best to use a wet paper towel on the naan bread to make sure it doesn’t lose its moisture. Place in the microwave for 35 seconds.

You can also defrost and reheat the naan in one go on the stovetop, with it often taking less than two minutes. Heat the pan on medium heat, and heat the frozen naan on each side for a minute at a time.

You may make your naan bread with practically any spice, ingredient, or topping of your choice...the list is endless.

Listed are some of the most popular and well-suited taste combinations to really elevate your naan bread:

Enjoy these naan with my 30+ easy curries made in under 30 minutes.

How to store Naan?

Naan bread should be stored in one of two ways: in the freezer or in an airtight bag/zip lock or container at room temperature.

If at all possible, avoid storing it in the refrigerator. Although storing it in the fridge gives it a longer shelf life than storing it at room temperature (two weeks instead of a few days), the quality deteriorates and it dries out faster.

Can you freeze Naan bread?

Yes, frozen naan stays good for upto 6 months. For store-bought naan, you simply keep the bag in the freezer.

However, if you want to freeze leftovers or homemade naan, follow the below steps:

When naan is frozen and defrosted incorrectly, it becomes excessively chewy. It can also become crumbly or soggy depending on how it s prepared.

Hence it is important to freeze the naan properly, so that it lasts longer and retains its amazing flavor.

When heating naan for just for 1-2 people, I prefer the microwave, stovetop or air fryer method.

If you are warming naan for an indian dinner party, then oven is the best method.

Leave a comment with your favorite method to reheat naan! 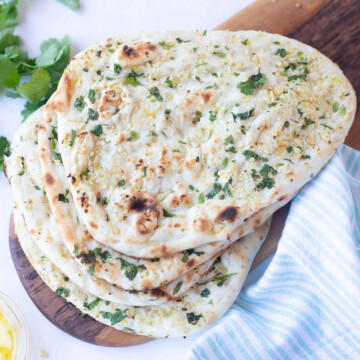 How to reheat Naan

Meeta Arora
Naan is a versatile flatbread that may be served as a side dish with Indian curries, giving even the most ordinary foods an authentic flavor. To enjoy leftover or frozen naan as fresh as possible, you must know how to reheat naan properly. Learn the tips to keep the crisp and pillowy naan texture and delicious flavor intact.
5 from 1 vote
Print Save Saved! Pin
Servings: 4
Calories: 374
Course: Side Dish
Cuisine: Indian
Diet: Vegetarian
Method: Air Fryer, Microwave, Oven, Stovetop
Prep Time: 3 mins
Cook Time: 5 mins
Total Time: 8 mins