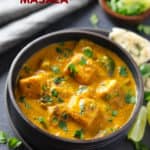 Almost a year back, I shared my most popular paneer recipe called, Paneer Butter Masala. This recipe is similar, but has an added flavor from the marinated and grilled paneer. If you are looking for a chicken recipe, try this Chicken Tikka Masala made in the instant pot or this Salmon Tikka Masala for the seafood lovers.

Paneer Tikka Masala is one of the most popular dish ordered in Indian restaurants, as is the delicious Mango Lassi. It is also a favorite on special occasions and parties. You might think that it is hard to get the restaurant quality flavor for Paneer Tikka Masala at home. However once you have the basic Indian spices, it is fairly easy to make this curry in the pressure cooker or even on the stovetop.

What is paneer tikka masala?

Paneer tikka masala is a dish of chunks of roasted marinated paneer (paneer tikka) in a spiced curry sauce. The sauce is usually creamy and dark orange colored. We will change it up a bit to make it easy to make it in the instant pot, with the same great taste.

Paneer is fresh, soft but firm cottage cheese popular in Indian cuisine. Paneer is a very versatile dairy product and used in an assortment of Indian curries, snacks and sweets.

You can find paneer at any local Indian grocery stores. Some Costco stores also carry paneer..yay! If you are unable to find paneer in a store, you can also make it from scratch in your instant pot. Just search and there are many recipes.

If you love paneer, check out this collection of 20+ Best Paneer Recipes.

Tikka is small pieces of meat or vegetables marinated in a spice mixture. These pieces are then grilled or sautéed to give a wonderful flavor to the dish.

You will love this Paneer Tikka Masala because:

√ It is vegetarian and gluten free. Reduce the amount of onions and it is low carb too.

√ It is easy to make in the instant pot

√ You can get a restaurant quality dinner at home!

Paneer Tikka Masala, has the below characteristics –

Paneer Butter Masala has the below distinctive features –

How to make paneer tikka masala

There are 4 main steps to make Paneer Tikka Masala in the instant pot.

This is the part that is different than the traditional Paneer Tikka Masala recipe. Ideally the marinated paneer pieces would be cooked in a tandoor (or grill) or oven until they start to char and then added to the sauce.

To go the traditional route, add the marinated paneer, peppers and onions to skewers (one piece at a time in that order). Bake and broil in the oven until they start to brown on the edges.

We are simplifying the recipe by browning the paneer in a pan. The only thing we lose is a bit of the smoky flavor. But trust me, you will still love this version of paneer tikka masala and will not hesitate to enjoy it for a quick weeknight dinner.

I like to have lots of sauce in my curries, so I can enjoy them with rice or naan. We will make the sauce in the instant pot. If you are new to the instant pot, check out this Instant Pot Quick Setup Guide to get you started.

Heat some oil in the instant pot. Add onions, ginger and garlic. Sauté for about 3 minutes. Add tomato, spices, cashews and water. You can cut the tomatoes in large pieces, as we are going to puree the sauce after pressure cooking.

Garnish with cilantro and enjoy!

This Paneer Tikka Masala is so creamy & so good!

Can this Paneer Tikka Masala be made on stovetop without instant pot?

Yes, of course. The instant pot just helps to make the cooking faster with cooking food under pressure. You can cook the exact same recipe in a skillet or a stovetop pressure cooker.

I have not tried making this vegan version, but here would be my suggestions to make Vegan Paneer Tikka Masala.

What to serve with Paneer Tikka Masala

We love to enjoy this paneer tikka masala with garlic naan, paratha or roti.

Rice is another great option. You can use brown or white basmati rice. If you like flavored rice, check out my cumin or jeera rice recipe. It goes really well with this curry.

For healthier alternatives, use quinoa or cauliflower rice as a side with this paneer tikka masala!

Looking for more paneer recipes, check out my popular recipes: 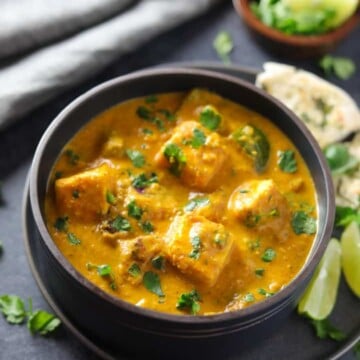 Marination: Use plain full fat or greek yogurt for the marinade.  In a hurry? You can skip sautéing the marinated paneer and veggies when in a hurry. Dont skip marinating for at least 15 minutes (while you get the other things ready).  Make it Vegan: I have not tried making this vegan version, but here would be my suggestions to make Vegan Paneer Tikka Masala. Make it the traditional way: Add the marinated paneer, peppers and onions to skewers (one piece at a time in that order). Bake and broil in the oven until they start to brown on the edges. Then use add to the sauce. Stovetop Method: For a stovetop pressure cooker, cook the sauce ingredients for 2 whistles. For a pan, after adding the sauce ingredients, cover and simmer until the onions and tomatoes are well cooked in about 15 minutes. Then puree and add the marinated paneer.  Tomatoes: I use fresh tomatoes in this recipe. You can replace with 1 cup of canned diced tomatoes. Created: This recipe was created in a 6qt Instant Pot DUO60 Multi-use Pressure Cooker.