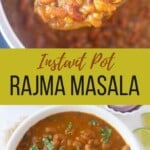 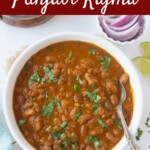 Rajma Masala, Indian Red Kidney Bean Curry a favorite comfort food to enjoy with rice. You can make this red bean curry in an instant pot or traditional pressure cooker. Learn to make Rajma along with pot-in-pot Brown Rice.  This is a vegan & gluten-free recipe.

Rajma is also known as Red Kidney Beans. They are a rich source of fiber and protein.  They serve as a great source of protein in a vegetarian dish.

Rajma Chawal (Red Beans with Rice) used to be a favorite meal for me. Being a Punjabi, I was fortunate that my mom used to make melt-in-the-mouth rajma chawal almost every week when we were growing up. So here we will make authentic Punjabi Rajma Masala. Now I like to make rajma in Instant Pot for the convenience. More so, as I can make the whole meal with brown rice in one pot.

What is Rajma Masala?

Rajma is a popular vegan dish from the Indian subcontinent, consisting of red kidney beans in a thick gravy with many aromatic spices. It is usually served with rice. The North Indian Punjabi style of making Rajma Masala is the most loved. Combine Rajma with rice, called Rajma Chawal is the most popular comfort food in North India.

How to make Rajma in Instant Pot?

Rajma or Red Beans takes longer to cook, which makes them a perfect fit for pressure cooking. In India, beans are always prepared in a traditional stovetop pressure cooker.  So when I got the Instant Pot, they were one of the first dishes I tried.  I was glad to see a "Bean/Chili" mode, which was the perfect setting to cook Rajma Masala.

In this recipe I use basic spices. You can also use Rajma Masala, which replaces all other spices in this recipe.  I like the MDH brand Rajma masala powder.

Let's go through the step by step recipe to cook Rajma in the instant pot.

At this time, you can taste the rajma and if the spice is low for your taste buds, add more Garam Masala.

One simple trick to get a thicker gravy texture is to mash some of the cooked rajma with a laddle in the same pot.

One of the big advantages of the Instant Pot is - the option to do Pot-in-Pot Cooking or PIP. This means being able to cook multiple things at a time, by also cooking in a small pot inside the main pot. To do pot-in-pot cooking, you need a tall trivet and stainless steel containers that you can use within the main pot.

Here is how I make Rajma with pot-in-pot Brown Rice in the instant pot: 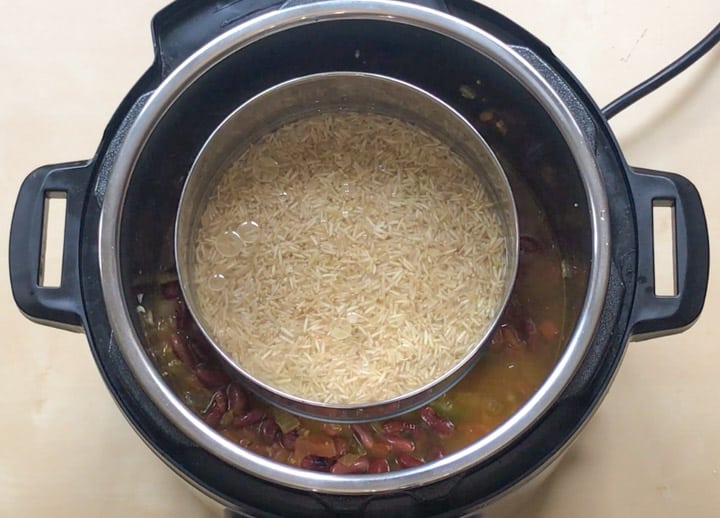 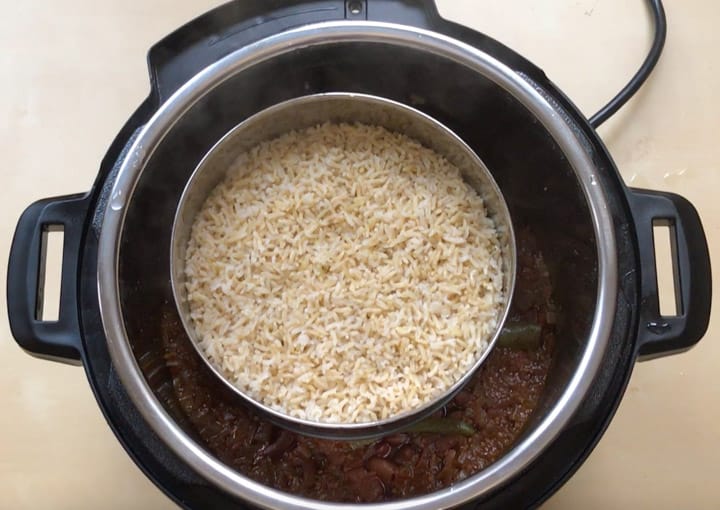 Garnish with cilantro.  Serve with rice, roti or naan.  You can also enjoy red beans curry as a soup.

How to make Rajma in a Stovetop Pressure Cooker?

Follow the sam steps as above. Just cook the rajma on stovetop pressure cooker for 1-2 whistles on high heat, then set the heat to medium and cook for another 15-20 minutes.

How to make Palak Rajma Masala?

Want to add greens to your meal? A great variation to this rajma recipe would to add some greens such as spinach or kale or chard to the rajma. After the rajma is cooked, stir in 2 cups of chopped greens into the curry. Let it sit for 5 minutes so the greens can soak in the flavors of the curry and enjoy!

How to make set-and-forget Rajma?

Lately, I have been trying making Rajma my just adding all the ingredients to the pot and pressure cooking. You will be surprised, that works like a charm. The Rajma are cooked really well and have almost the same taste as when onions and tomatoes are sautéed to make the curry.

If you are short on time and want to skip the effort to saute, give this method a try!

Should I soak kidney beans before cooking?

I see this question come up many times. For rajma to be well-cooked, they should be melt-in-the-mouth soft.

Many people have their preference on whether or not to soak beans. I started with soaking as that is what I have seen my mom do. I like that after soaking the beans are easier to cook and take much less time cooking.

Some studies suggest that soaking helps reduce the amount of phytic acid which reduces absorption of important nutrients and aids in digestion. Others suggest soaking does not affect the digestion. So choose what works for you.

Sometimes red beans also take longer to cook if they are old. If you have an option to check the packaging date, then buy beans that are not too old.

I forgot to soak beans, can I still make Rajma?

Let me share the quick soaking method. Heat water in a microwave or stovetop. And soak beans in the hot water for 30-60 minutes. This will give comparable results as soaking for longer.

If you decide to not soak, then you can still make rajma. They will take about 45-50 minutes to cook on high pressure. You will also have to add more water as soaked beans absorb some water. I would suggest 2.5 cups water for 1 cup of beans.

Can I use canned beans in this rajma recipe?

If using canned kidney beans in this rajma recipe, cook for just 6 minutes on high pressure and reduce the water to 1 cup. This will give enough time for the beans to soak in the flavors of the curry. If cooking with canned beans, use white rice for pot-in-pot cooking.

What to pair with Rajma Masala?

The best comfort food combination is - Rajma Chawal. This translates to red beans curry with rice.

Add a veggie side dish such as Aloo Gobi or Bhindi with rajma. Or add some greens such as spinach while cooking Rajma Curry. 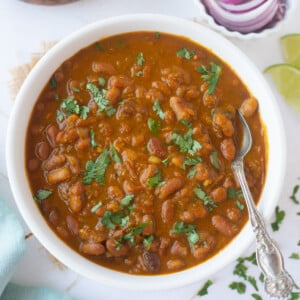 Thicker Curry: One simple trick to get a thicker gravy texture is to mash some of the cooked rajma with a laddle in the same pot. Canned Beans: I prefer to use dry red beans, but you can make this recipe with canned beans as well.  If using canned beans, you want to cook on manual for about 6 minutes with natural pressure release. Also, reduce the water to 1 cup. If cooking with canned beans, use white rice for pot-in-pot cooking.  Set-and-forget Method: I have tried making this Rajma Masala by just adding all the ingredients to the instant pot and setting to pressure cook. That works perfectly for this recipe. If you are short on time, you can skip the initial sautéing steps.  Rajma Masala Spice Bend: If you have Rajma Masala, you can substitute all spices with it. Just add the salt and garam masala to your taste.  What to pair with Rajma Masala? Enjoy Rajma Masala with rice and a side of yogurt or raita.    Created: This recipe was created in a 6qt Instant Pot DUO60 Multi-use Pressure Cooker. Note: I have reduced the amount of water for cooking in this recipe as that has worked better for the final result based on reader feedback.